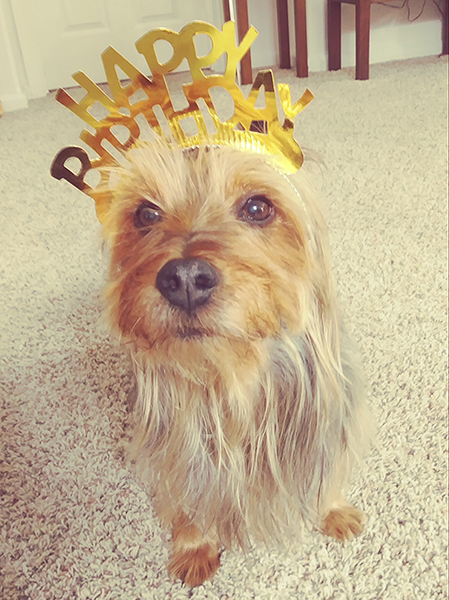 Last Wednesday my family celebrated Buddy’s 11th birthday. I don’t know his true birthday, only that he was a summertime puppy. However, a little over 8 years ago on August 21st, 2011, I picked up Buddy from Barbara, who was working with Silky Terrier Rescue as a foster mom, so that’s his unofficial birthday. He’s been a great little pal and I’m very thankful to them both for rescuing and fostering Buddy till he came into my life. And am praying that Buddy will have many more happy and healthy years.

It’s my belief that many people don’t understand what salvation is, not only nonbelievers, but also many people who claim to be Christians. I agree with the Basic Gospel ministry that many preachers teach only “half a gospel”, i.e. that to become a Christian you repent of your sin. True enough.

But the problem with humanity is not that we sin, but that we are sinners. We sin as a result of who we are: fallen humanity. Whether you believe in Adam or Eve or not, the point of the story is that humanity chose to believe satan, rather than God. They chose to be their own gods and choose for themselves right and wrong, rejecting God as their Lord Who defines right and wrong.

We were created in God’s image (Genesis 1:26). God is a triune being–Father, Son and Holy Spirit. So, we too, were once triune beings–body, soul and filled with God’s Spirit. When our human ancestors rejected God, the Holy Spirit left the human race. As a result, we are all born incomplete: body and soul only. Everyone is born spiritually dead. That is why everyone feels incomplete and tries to fill that emptiness with food, drugs, alcohol, pleasure, sex, whatever, to make that wrong feeling go away. But it never works because that hole in your soul was meant to be filled with God’s Spirit only. Nothing else will satisfy and make you feel complete.

What that means is that, as Apostle Paul explained to the Ephesians who lived in a culture steeped in the occult:

“You were dead in your trespasses and sins,…” Ephesians 2:1

Doing good works or being good or knowing enough or being wise isn’t going to give you life. The problem isn’t just that you are bad and God is good; the problem is that you’re dead in your sin and need spiritual life.

And only Jesus Christ can give you life.

It is the reason why, after Adam and Eve listened to satan and rejected God’s authority, that they ran and hid from Him. And God was walking around asking, “Where are you?” It wasn’t that God isn’t omniscient and didn’t know where they were physically; it was because they were no longer connected to Him spiritually (Genesis 3:9).

Jesus died for our sins; He took the punishment we deserved to satisfy God’s wrath for our sinful behavior.

“But God, being rich in mercy, because of His great love with which He loved us, even when we were dead in our transgressions, made us alive together with Christ (by grace you have been saved), and raised us up with Him, and seated us with Him in the heavenly places in Christ Jesus, so that in the ages to come He might show the surprising riches of His grace in kindness toward us in Christ Jesus. For by grace you have been saved through faith; and that not of yourselves, it is the gift of God; not as a result of works, so that no one may boast.”–Ephesians 2:4-9

So the main point I’m trying to get across is: your works don’t make you right with God because you’re spiritually dead without the Holy Spirit indwelling you. You have to become spiritually alive and trying to be good doesn’t cut it. You can never be good enough to earn the Holy Spirit. You receive Him by asking in faith, admitting that you are sinful, i.e. cannot meet God’s standards and need Him to change you through His resurrection power.

It takes away all boasting before God because you cannot stand before Him and say, “Look how good I am. God is really pleased with me.” That’s what Christians call “legalism”: thinking that you can follow God’s rules to be right with Him. And those people are usually mean and judgmental. It may not be that they are not saved but that no one properly explained to them what salvation is after they accepted Jesus by faith.

Jesus said, “If you then, being evil, know how to give good gifts to your children, how much more will your heavenly Father give the Holy Spirit to those who ask Him?”–Luke 11:13

After accepting Christ, you’ll once again be whole: body, soul and Spirit.

Much love from Dawn and Buddy

There is much more that could be said to clarify, but, hopefully, I’ve laid the foundation for a greater understanding of why we need Jesus in our life.